Some time ago I needed to connect a MySQL database from SWI-Prolog to process the data inside it. I had previously tried to get this working through ODBC but without much success. I gave it a last try and was able to get it working.

ODBC is an old standard (from early 1990's) developed by Microsoft to make it easier to query SQL databases. It also has implementation on Linux called unixODBC. SWI-Prolog contains an ODBC interface that can use unixODBC but setting up the proper configuration can be a bit confusing as there are so many layers to configure. The context diagram for ODBC looks like this: 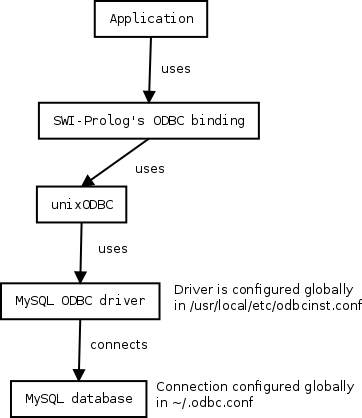 Unlike with direct MySQL interfaces in other languages, you need to specify the configuration parameters in multiple files scattered throughout the system. This was the step where I got stuck the last time.

ODBC is an old technology but matured and stable and works well (once you manage to configure it). The drivers are provided and maintained for lots of databases.

The actual location of configuration files can be checked after unixODBC is installed (either from a system package or by compiling from source). This can be done through the command odbcinst -j. This will print something like this:

The database drivers will be configured in /usr/local/etc/odbcinst.ini by this output. Each database driver (MySQL, SQLite, PostgreSQL, anything that has ODBC driver) can be added here. The file will take the location for the loadable module and some driver-specific options.

The actual driver has to be installed before using it. I downloaded a compiled binary driver for my machine architecture directly from the MySQL site. It is possible to compile it yourself but you need a proper version of MySQL client libraries and the boost library installed.

The binary package contains the driver file lib/libmyodbc5a.so. This can be installed in a straightforward way by copying it to the system and adding the ODBC driver configuration entry manually as the root user:

Multiple driver sections can be added into the file.

After the driver is configured, a connection using the driver can be added. I put my connection into the user-local file ~/.odbc.ini. It is possible to add system-wide connections too.

The file contains the database driver name with some additional parameters and driver-specific options such as the server hostname, port and the MySQL database name:

Connecting and querying is easy once everything is configured:

Further information on prepared statements and other useful features supported by SWI-Prolog's ODBC interface can be found in its docs. The similar connectivity can be set up for SWI in Windows too, except the drivers and connections are configured using the Windows own graphical tools.